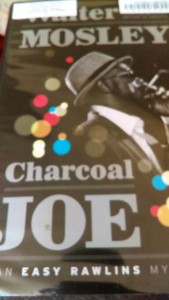 Walter Moseley’  latest Easy Rawlins mystery set in 1960s Los Angeles shows the city most of us have never known. See it through the eyes of a black detective penned by the master of character driven drama. The reader can visualize every detail of what is taking place and become familiar with the characters and what makes them tick.  The characters come alive. This story  takes place where “Rose Gold” left off but each of his mysteries stands on its own. I didn’t know about “Rose Gold” until I read the book jacket, and it didn’t matter a bit.

“Charcoal Joe” has a cast of characters so vividly described that you feel like you know them. There is a wrongly accused of murder college student, his mother and father who he doesn’t know are his parents, a couple of beautiful but self-serving prostitutes, a conjure woman who gives Easy a mind-opening cup of tea, Easy’s daughter Feather who loves him no matter what he has to do to make a buck, and a motley group of gamblers and bad guys..

I am a Walter Mosely fan for sure, ever since his first book “A Devil in a Blue Dress” (made into a movie starring Denzel Washington). Read “Charcoal Joe” and you might become on too.