The Newport Beach Film Festival has added a Culinary division this year, and the film entitled “Cuban Food Stories” caught my attention. So on Sunday afternoon with my friend Jennifer we watched this interesting story directed and narrated by Asori Soto. 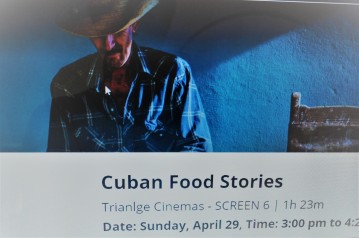 After 10 years living as an expat in the United States, Asori decided to return to his homeland of Cuba to search for the missing flavors of his childhood. It was a travelogue through the small villages of Cuba – most of which we have never heard – interviewing the locals and watching them prepare their traditional Cuban dishes. Cubans have lived off the land and the sea for generations. Many of the people interviewed had never before seen a camera.

Asori  Soto along with his producer and others of his team were in the audience for a question and answer session. The last question asked Asori was where would he go today in Orange County to get traditional and authentic Cuban food. He response was, “to Porto for a Cubano Sandwich!”.

How could we resist this. We looked up Porto on Jennifer’s GPS. The closest one is in Buena Park near Knotts Berry Farm, so off we went. Porto Bakery & Cafe occupies an entire newly-constructed, very contemporary building on Beach Boulevard. There is a bakery, a full coffee bar and a deli, offering everything Cuban under the sun!!

We are all about sampling and sharing, so we ordered the Cubano Sandwich cut in half and served with crispy plantain chips, Potato Balls (Papa rellena), Chicken Empanadas, Tamales filled with seasoned braised pork and wrapped in the lightest, tastiest massa ever. For dessert, there were so many sweets that it was impossible to choose. We opted for their freshly baked flakey puffed pastry filled with cream cheese…..simple but delicioso!! 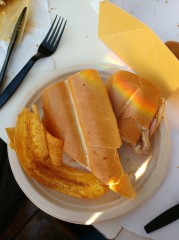 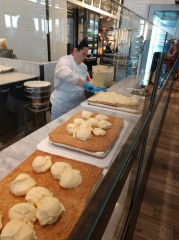 Everything is packaged to go so there was no fancy plating to photograph. There were large covered patio seating areas to enjoy your food there or take it home for later. We, of course, did both. I can’t resist showing you some of the cakes. The line to the bakery was by far the longest.

What a fun afternooon, and it’s always great when you can share it all with a good friend – especially with someone who loves food as much as I do.

The Other Thing – Porto’s is also located in Glendale, Burbank, and Downey. Check out their website at http://www.portosbakery.com. Be careful though, you might just end heading for your car.