The Milk Bar is so much fun you don’t know whether it’s the food or the atmosphere that is so engrosing. The food is served in a paper bag so you can take it with you or eat it there. How could I resist a sandwich called “Clooney’s Choice”?  It was made with marinated chicken, avocado, tomato, roasted red peppers, mozzarella, cilantro and lemon mayo. The “Occidental Oriental” was Kaitlynn’s choice and apparently her “usual”. It was like a Chinese chicken salad on a bun. You can’t leave without experiencing their milk shakes or malts. Billed as old fashioned and hand dipped, they are huge and all under $4.00. “Chocthunder from Downunder” shake for Kaitlynn and the “Caramel Carama” malt for moi. The Moo Crewe was very friendly and accommodating. The entertainment is on the wall in the form of Cow Economics from around the world. For a good laugh, check out their website. 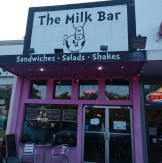 P.J.s Coffee is the Starbuck’s of New Orleans and Kaitlynn’s favorite hangout.  The first one was founded in 1978. There are two cafes on the Tulane campus and one right across the street from Kaitlynn’s apartment. Their summer featured coffee is Southern Wedding Cake Iced Latte. That was my order every time.

We had a fancy brunch on the 24th to celebrate both our birthdays. Ralph’s on the Park is across the entrance to City Park which is four times larger than New York’s Central Park. Our table was decorated with a red ribbon to indicate there was a birthday to celebrate. A handsome older gentleman was playing the piano in the bar – wonderful old songs from the 30s and 40s.

First course was a Pomegranate Sparkler for me and a Shirley Temple for Kaitlynn accompanied by Cream Biscuits with seasonal fresh made jam. Second course was Turtle Soup for Kaitlynn and Corn Tomato Bisque with a corn relish float for me. Entrée choices for us were Southern Schnitzel – paneed chicken breast, scrambled eggs, chicken sausage cream gravy and red bean puree, AND Crawfish Cakes & Poached Eggs with smoked tomato butter sauce, arugula and Cherry Tomato Salad.

Dessert turned out to be a real party. We ordered Banana Bread Pudding and Chocolate Doberge. Then while we started in on those, the waitress brought us each a chocolate birthday with a candle. Four desserts at one meal –  A chocolate-lover’s dream! 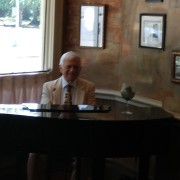 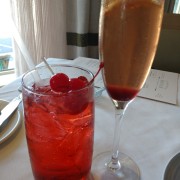 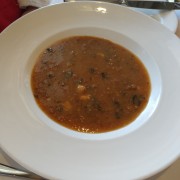 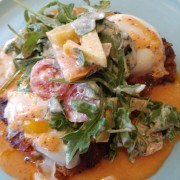 After a St. Charles street car ride and a tour through the National WWII Museum and Ogden Museum of Southern Art (more about those later), we ate lunch at Flamingo  Go Go – what a kick!! It was a Monday so I had to have my Red Beans and Rice. It was served with smoked sausage. I also had to have the drink of the day, it seemed only right. The frozen margarita tasted so good on a day that reached 90+. 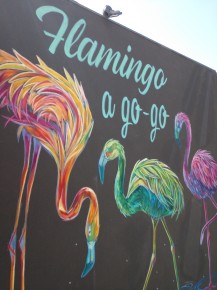 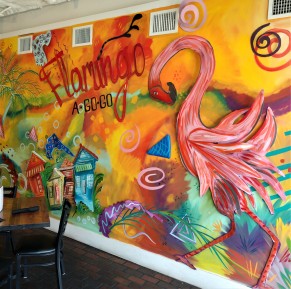 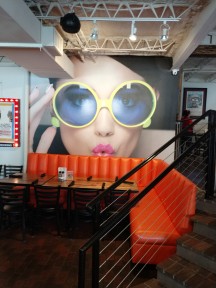 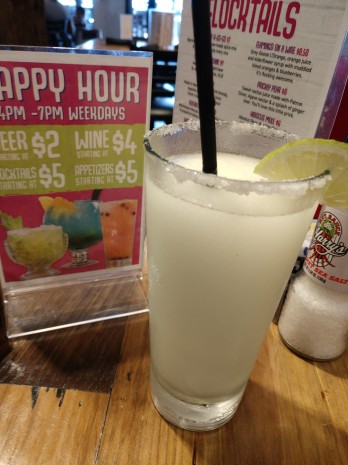 Flamingo a Go Go, P.J.s Coffee, Ralphs on the Park, The Milk Bar, The Other Thing