Bosscat, on MacArthur Boulevard between Birch and Campus in Newport Beach, is my 100th blog post. So, I wish it had been a more enjoyable experience. Not to say that Bosscat was not good, it’s just far from my Top Ten. It caught my attention because it features Southern style cooking. So with that in mind, Debbie (my first Thursday of the month foodie friend) and began our dining experience with Pulled Pork Hush Puppies – cornbread battered pork, deep fried and served with Carolina barbecue mustard. Not much taste to these, so the mustard saved this dish.

Entrée for Debbie was Fish in the Rye – Chef’s selected White Fish, Rye Whiskey Butter, Shaved and Ancient Grains. Those grains looked pretty much like rice in a sweet and sour sauce of some kind. I chose the Avocado Farm Chop – romaine Lettuce, heirloom tomatoes, onions, cucumbers and Lemon Verbena. The well-seasoned shrimp served on top was the best part of the salad. All the vegetables were chopped so finely, it was hard to define the flavors. 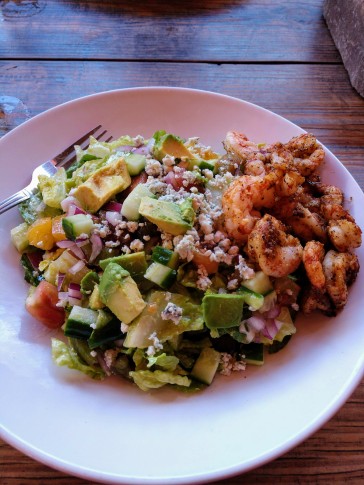 The dessert was the best part of the meal – Chocolate Bourbon Custard, served with whipped cream and crushed carmelized pralines. 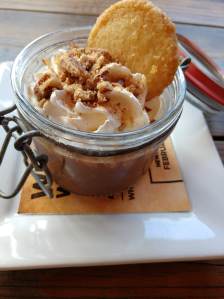 The Other Thing – The rest of the menu looks interesting, and the prices are fairly reasonable, service was fine. However, I don’t know if there is anything really special to lure me back to Bosscat.