Back in Avignon for a full day. Walking tour in the morning to the Pope’s Palace – important because it is the only pope palace in the world. In my high school French class we learned a famous song, “Sur Le Pont d’Avignon”. It is here. Built in the 12th century it originally has 22 arches of which only 4 remain standing today. Original lyric was “Sous le Pont d’Avignon” because it was too narrow to accommodate dancers so they danced under the bridge. The flood of 1668 swept most of it away. What remains forms part of the UNESCO-listed Avignon historic center.

Avignon was home to 7 pontiffs between 1309 and 1377. Sitting high above the Rhone River and circled by medieval ramparts, this walled old town has mostly cobblestone streets and lantern lit passageways. 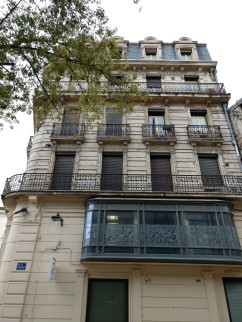 Our afternoon optional tour was to Chateauneuf-du-Pape Wine Tasting. Owned and operated by the Famille Perrin, it was originally constructed in 1366 by Pope John XXII as a summer residence for the Avignon popes. The talk at the winery was very interesting, but the tasting was a disappointment. I think Kathy and I have been spoiled by previous tastings we had experienced in Italy. 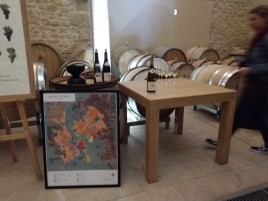 Tonight was Taste of Provence Night. The wait staff was in fancy berets and aprons and the tables were with colorful cloths and centerpieces. Dinner was a “hearty French buffet” with chicken, duck, roasted potatoes, mixed vegetables, ratatouille, with special sauces for the meat. For all the fuss leading up to this event, it was a little disappointing. The meat didn’t have much flavor even though the sauces were tasty. The best part was the desserts – especially the pear tart. We met some new people though, so it was a nice evening. The staff led the dancing in the lounge after dinner and got everyone up dancing – even me – with the traditional Chicken Dance, Electric Slide, YMCA, Sweet Caroline, Great Balls of Fire, and a conga line!! The staff made it very entertaining.

Last night in our room, the ship went through another lock, and we saw it from a different perspective out on our veranda. The walls came so close to the ship we could have touched it. This time it took almost one hour and raised the ship to above the level of the lock. We will go through 15 locks on this river for a cost to Viking of 30,000 euros. 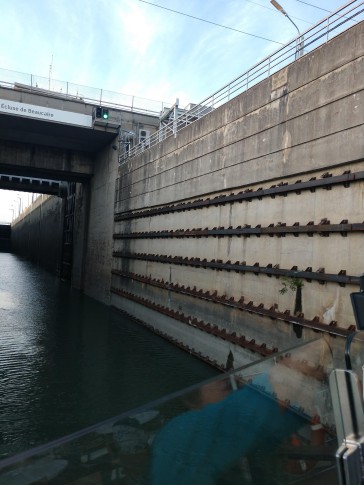 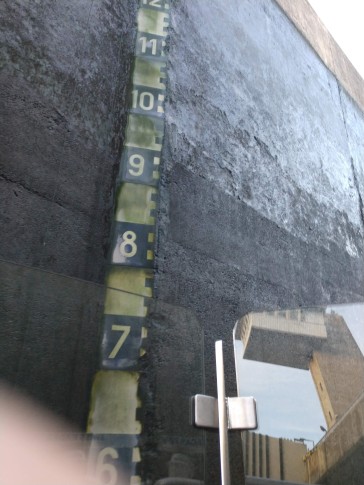